The Old Quarter seems like a romantic place, a place to stroll along with the person you love and let the chemistry flow. And when two people feel a connection, it is said that there is chemistry between them.

Plaça de Sant Feliu. Photo Alex Ambit.
In fact, this expression has a basis in science. Recent studies indicate that a greater number of certain molecules are present in the brains of the people in love. Although the names seem complicated, surely some sound familiar: testosterone, estrogen, dopamine, norepinephrine, serotonin, oxytocin, and vasopressin.

The first two molecules are pheromones: hormones that are related to the more sexual part of the relationship, which includes attraction to the other. The role of these hormones in animals has been demonstrated: males of certain species can detect very small amounts of these hormones when released by females in heat. For example, a single pheromone molecule emitted by a silkmoth is capable of attracting the male of the species. In fact, many devices for capturing insects, such as bees and ants, use these hormones.

Dopamine, norepinephrine and serotonin molecules are neurotransmitters: they are chemical substances that allow communication between neurons. In some cases their effects are similar to adrenaline. Their presence is related to the early stages of love, which sometimes translates into behavior similar to that of an illness: one cannot think of anyone else but their beloved.

The last two, oxytocin and vasopressin are more related to long-term relationships. Lately studies have been published that reveal that oxytocin acts in brain regions associated with social and emotional behaviors, such as trust. Its effects, however, are modified if it acts in conjunction with other molecules. 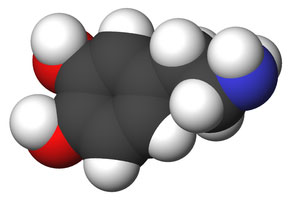 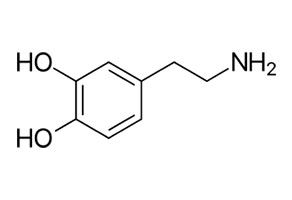 Dopamine
For years, however, the star has been phenylethylamine. It is a molecule from the amphetamine family that is associated with short-lived states of physical and psychological euphoria, such as those caused by physical exercise. Some of the molecules mentioned above may have formed as a consequence of the presence of phenylethylamine in the brain. There are hypotheses that relate this molecule to infatuation. Thus, it would explain why this phase of love is relatively short: the body becomes accustomed to this substance and after a while it no longer reacts in the same way as at the beginning. However, this hypothesis has not yet been sufficiently proven.

Many people who have suffered heartbreak console themselves by eating chocolate. This food is especially rich in phenylethylamine. It could be, then, a type of self-medication against the withdrawal that comes from a lack of this substance.