The place in front of us is called “La Carbonera.” It is a part of the old convent of Sant Antoni, run by Capuchin friars. From here you can enter the Girona history museum through narrow corridors that pass alongside an underground water cistern. 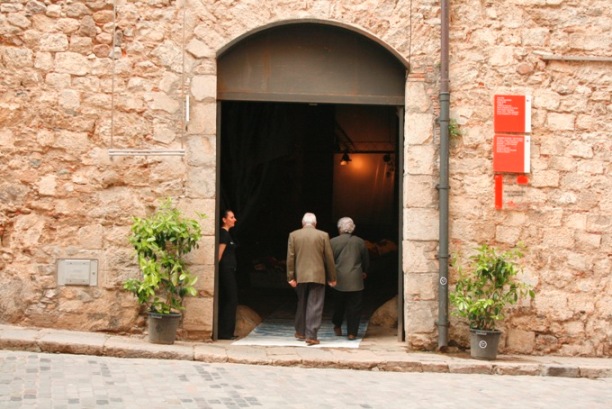 La Carbonera, by Josep Duran
When James Watt invented the steam engine, few thought it would be a determining factor in the industrial revolution of the nineteenth century. Factories operated using the energy from burning coal, and in many cases stoves burned coal for heat. Coal is a fossil fuel, like oil and natural gas. They come from the decomposition of living beings and are part of the carbon cycle. Fossil fuels have been used and are used as a source of energy because their reaction with oxygen gives off heat. It also results in steam, carbon dioxide and other gases that vary depending on the composition of the fuel.
Since the 70s, when the oil crisis shook the economy in many countries, the world has been searching for renewable energies that are respectful of the environment. Some have not been as successful as hoped, but for others, progress has been considerable. An example is photovoltaic solar energy. It is almost magical to see how a small solar plate is capable of generating enough energy to run a light bulb or a small electric motor.

It is not difficult to understand how they work if we understood how an LED makes light. The principle is very similar; in fact it could be said that it works the other way around. In a photovoltaic cell, two materials are put in contact: one rich in electrons and the other deficient. They are closed between two conductive plates. When light hits, it causes electron movement that is ultimately responsible for the electrical current (like we saw at stop 3). The basic material used to make photovoltaic cells is very abundant on Earth: silicon. Beach sand contains it in large quantities. The problem of the price of the cells is not so much in the raw material as in the technology required to manufacture them.

Solar panel, by Pep Anton Vieta
Lately, there is talk of another source of energy, hydrogen. It is already being applied in some vehicles and in pilot factories. In the same way that when carbon burns it gives off carbon dioxide, when hydrogen burns, it also gives off its oxide: water. It is, therefore, a very clean combustion, which generates a lot of energy. However, that’s not how hydrogen engines work. To understand how they work, we first must explain that hydrogen can be obtained through hydrolysis: a source of current is connected to a solution of sodium or potassium hydroxide in water, and at one of the poles (electrodes), oxygen is formed, and at other, hydrogen.

Therefore, energy is required to break the water molecule. Once broken, it is as if the hydrogen stored that energy, because when combined with oxygen, it will come out. That’s why it is sometimes said that hydrogen is like a battery. When hydrogen comes into contact with the oxygen in the air in a special cell, the two combine to produce water and generate an electrical current. It is like the hydrolysis reaction, but in reverse. This current runs an electric motor.

Coal is no longer seen at “la Carbonera.” The stoves have been changed out for more modern ones, cleaner ones.

Sulfur compounds contained in some fossil fuels are the main reason behind acid rain. Their combustion and subsequent reaction with the water in clouds transforms these compounds into acid. This precipitation is then very damaging to the environment.

This reaction is not strange: onions make us cry for a similar reason. When we cut an onion, cells are broken and certain substances are released. The substances at play here are enzymes and sulfoxides which, when they come into contact, give rise to a molecule (a propanethial derivative) that contains sulfur. This molecule causes us to cry because when it reacts with the moisture of our eyes it produces sulfuric acid, among other things. This is a very strong acid, and our eyes react by sending water to dilute it and make it less concentrated. This water comes in the form of tears. That’s why onions make us cry.